This pou kara or flagstaff memorial records and honours the names of  77 men from Ngāti Maniapoto who served overseas during the Great War. Twelve men lost their lives.  These men have a star next to their name.

The memorial was unveiled on 11 November 1919. It was funded by a collection amongst the tribe in July of that year when memories of the war were still very much vivid.  The King Country Chronicle reported that it was a notable gathering, Māori from all parts coming to attend the ceremony. Dr Maui Pomare, M.P. for Western Māori, unveiled the monument.  Mr. W. T. Jennings, the local M.P., remarked:

“This noble monument … would stand for all time as a record of the splendid deeds that had been performed and of our reverence for the sacrifices that had been made.”[1] 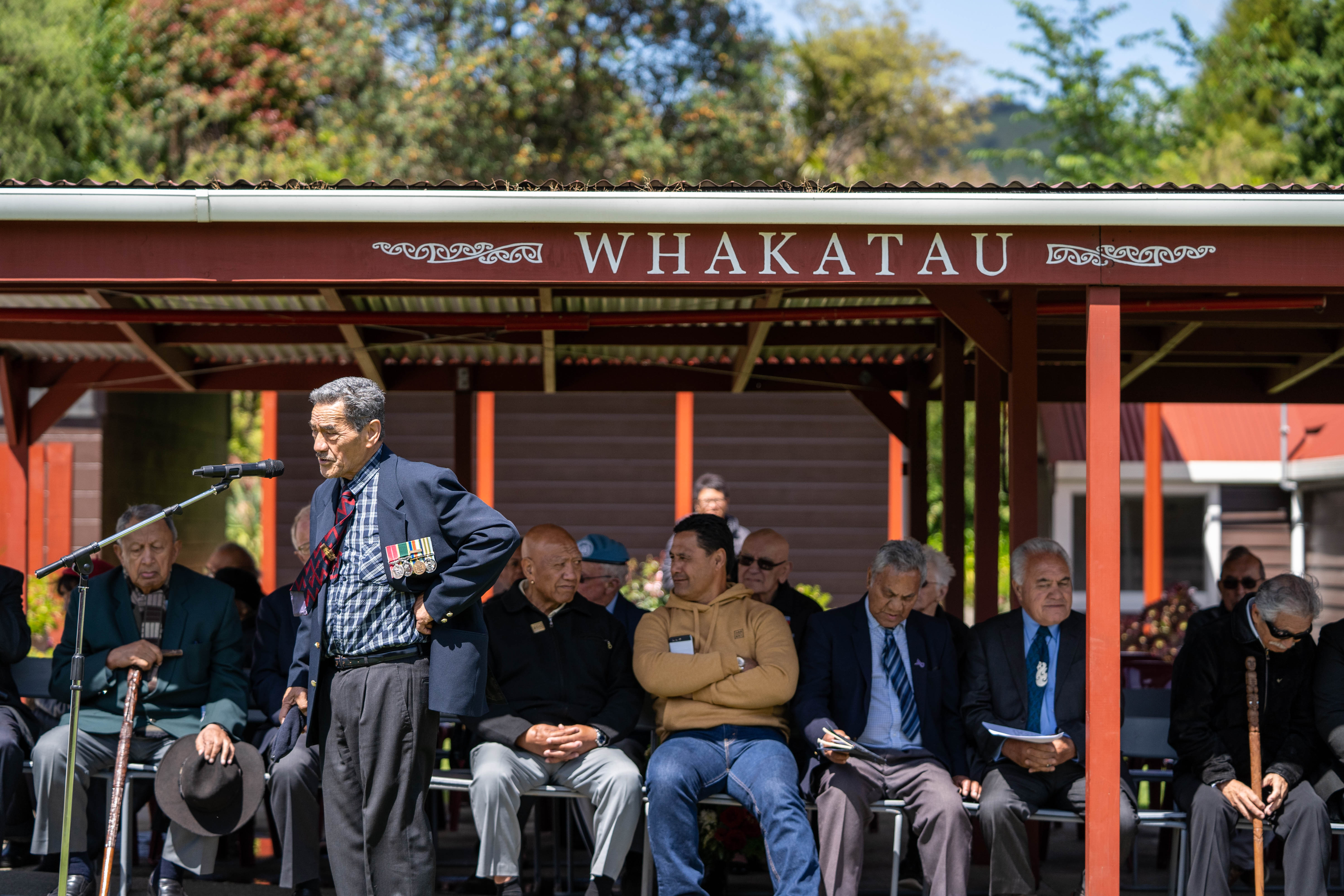 It was also commented on by the local newspaper at the time that Te Kuiti generally had not yet erected a memorial and that the Māori had in effect shown them up their Pākehā brethren.

Interestingly, in many cases, the names recorded on the memorial are not the names that the men enlisted under.  Many enlisted under English derivations or completely different names to hide their age. For example, Lt. Mania Erihi is the Māori name of Lt. Oliver Sydney Ellis while Wi Amohanga, aged 14, enlisted as George Nicholls. Tribal researchers have identified all but one of the enlistment names.

The stories of many of these men make for interesting reading.  Among the men is a very committed Rewi Erihi or Stanley Ellis who made his way to England after being rejected at home for medical reasons. He joined the Royal Army Corps Mechanical Transport Section. There is also Taare Tūwhakaririka or Charles Barton, the second Maori pilot in the Royal Airforce and Pau Timi Tana or Ned Turner who sadly lost his life on 25 April 1915 when the Allied Forces landed on the Gallipoli Peninsula. Further, there are five Wi brothers from Te Kuiti who enlisted and six Clarke brothers from Ngati Parewaeone of Otorohanga.  Three of the Clarke brothers sadly lost their lives.

This restoration work was undertaken by VJ Williams of Te Kuiti. with the support of the Trustees of Te Tokanganui-a-noho marae, the Ruapuha Uehaka Hapū Trust,  the Maniapoto Māori Trust Board and the Lotteries WW100 Committee.

The memorial was restored for the very reason that was scripted on the flagstaff, namely, ‘Hei mohiotanga mo te iwi me te atua me nga uri a muri ake nei, na reira, ka whakamaua nga ingoa o nga tamariki katoa o Maniapoto i haere i uru i mate ki te pakanga, e mau nei o ratou ingoa. [So that the people and God and future descendants may know, hence the names are recorded of all the boys of Ngati Maniapoto who went and died in the war.]

more kaupapa further by watching the video below:

Maniapoto Māori Trust Board is privileged to have supported Whīkoi mo Te Reo 2019 and look forward to seeing more kaupapa such as this in the near future.

Explore this kaupapa further by watching the video below.­