Results will be made available following the counting of special votes. 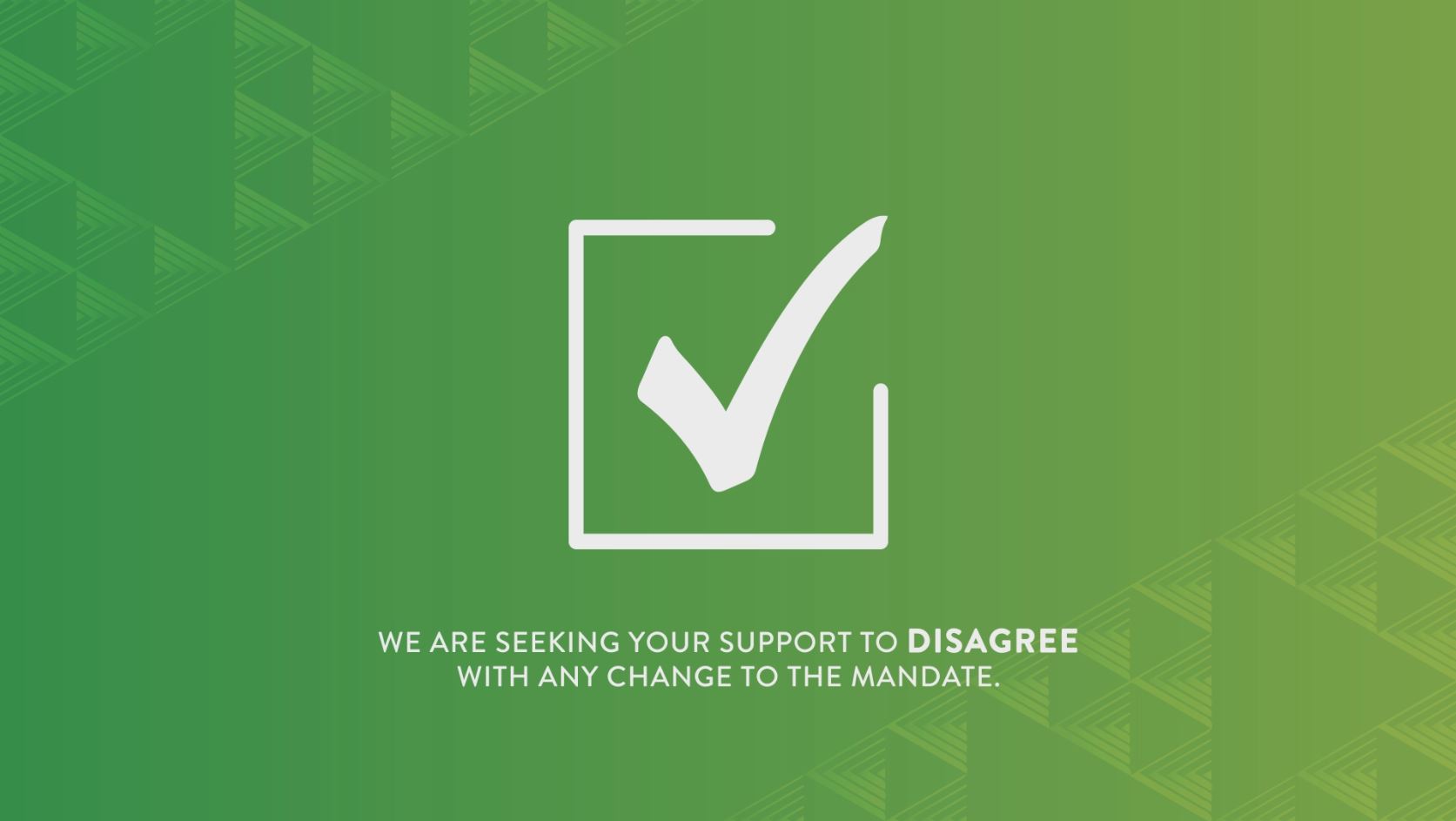 Following a series of consultative hui in 2016, Ngāti Maniapoto, by vote, gave the Maniapoto Māori Trust Board (“MMTB”) a mandate to negotiate with the Crown settling the historical claims of Ngāti Maniapoto (“the mandate”).

In order to clarify whether there is support for the mandate to be amended, the following resolution will be voted on.

All Maniapoto iwi members aged 18 and over had the opportunity to vote on the resolution from 12 pm on Tuesday 20 April 2021 to 12 pm on Friday 7 May 2021. MMTB is using an independent election company, Electionz.com to conduct the voting process. This will include postal votes, internet voting and casting your vote in person at the Special General Meeting (details below).

In order to allow an opportunity to discuss the resolution, a Special General Meeting (“SGM”) was held at the Les Munro Centre, 8 King Street East, Te Kūiti at 10 am on Saturday, 1 May 2021. The SGM provided iwi members with an opportunity to ask questions to make an informed decision when casting their vote. Enclosed in your voting pack, is important information on the withdrawal process, information presented at the SGM, your voting paper and a postage paid return envelope.

RESOLUTION: To commence a process to change / amend the mandate

Any members of Maniapoto who are not registered, will also have an opportunity to vote by casting a special vote. Special votes will be subject to and only become valid once the MMTB Whakapapa Validation Committee, in consultation with Te Whakaminenga o Rereahu, have validated the whakapapa of the voter. Special vote packs are available by contacting the Independent Returning Officer on free phone 0800 666 045 or iro@electionz.com.

If you have any questions or require any further information, please contact Independent Returning Officer on free phone 0800 666 045 or iro@electionz.com. We encourage you and your whānau to participate in deciding this very important kaupapa.

Check out the below whakaaro series about the settlement process and moving forward together. View full series here

WHAT IS A MANDATE?

Mandate is the authorisation or approval of the people for MMTB to represent Te Iwi o Maniapoto in Treaty settlement negotiations with the Crown.

WHO CARRIES OUT THE VOTING PROCESS?

The Independent Election company carrying out the election process will be undertaken by Electionz.

WHO IS THE MANIAPOTO MĀORI TRUST BOARD (MMTB)?

HOW DOES THE WITHDRAWAL PROCESS WORK?

The withdrawal process is set out at clause 15 of the Deed of Mandate. The Deed of Mandate is available to view here: https://www.maniapoto.iwi.nz/wpcontent/uploads/2020/06/Mandate-Strategy.pdf

For transparency, the full section regarding removal or amendment of mandate is set out below. Please note both MMTB and TWoR agreed to forgo the disputes resolution process set out in clause 15.

Extract from clause 15 of the Deed of Mandate:

“Removal or amendment of mandate

WHAT DOES IT MEAN IF I VOTE ‘AGREE’?

If you vote ‘Agree’, you support the TWoR’s wish to commence a process to change/amend the mandate.

WHAT DOES IT MEAN IF I VOTE ‘DISAGREE’?

If you vote ‘Disagree’, you support the existing MMTB mandate (without any amendments).

WHAT IS THE PROCESS TO AMEND THE MANDATE?

The process to amend the mandate involves MMTB undergoing the same process it completed in 2016 to secure the mandate. That process is set out in sections 18-22 of the Deed of Mandate (available here https://www.maniapoto.iwi.nz/wp-content/uploads/2020/06/Mandate-Strategy.pdf).

In summary, the process involves another separate vote whereby the Iwi will be asked to consider
an amended Deed of Mandate which removes certain groups and their claims from the Maniapoto settlement. As part of the process MMTB will organise and advertise hui where large numbers of the iwi of Maniapoto reside, both nationally (eg. Auckland, Wellington) and inside the Maniapoto rohe. At those hui information will be presented to assist you to make your decision.

Any withdrawal of group(s) or Wai number(s) from the MMTB mandate could have an impact on the scope and nature of the current Maniapoto settlement redress agreed in the IDOS. If any group(s) or Wai number(s) were to withdraw from the MMTB mandate, the Crown would need to carefully consider the implications of that withdrawal, looking at a range of factors including the location of certain redress and the fact that the group proposed to be settled under the MMTB mandate would be smaller without those groups in it.

Withdrawal does not necessarily mean the Crown would enter into separate Treaty settlement negotiations with these groups in the future.

In order to engage with the Crown directly to negotiate a settlement, any group would need to be recognised as a large natural group (LNG) by the Crown. Furthermore, if the Crown considered that any groups were a LNG, a group seeking to represent those groups for the purposes of Treaty Settlement negotiations would then need to go through a specific mandate process that is consistent with the Crown’s mandate requirements. The Crown is not currently considering any further large natural groups (LNG) in the Rohe Pōtae region and Crown capacity for LNG and mandate work is currently limited. As such, there is no certain outcome under this route.

WHY ARE WE BEING ASKED TO VOTE ON THIS IF WE HAVE ALREADY GIVEN OUR MANDATE IN 2016?

TWoR have obtained the support of 350 members of Maniapoto required to consider whether the mandate should be amended. You are asked to vote to clarify whether there is support for a process to amend the mandate to be commenced.

WHAT WAI CLAIMS WILL BE REMOVED SHOULD 75% VOTE ‘AGREE’?

Which specific Wai claims would be withdrawn would depend on the revised claimant definition proposed as part of this process.

Individuals aged 18 years and over, who descend from a Maniapoto tupuna such as Rereahu and his children, Hiaroa or Rakataura.

HOW CAN I VOTE?

If you are registered on the Maniapoto Tribal Register, you can vote via:
• E-vote (online via Electionz Website at www.electionz.com/MV2021)
• Post (using the enclosed free-post envelope)
• Ballot box in person (available at the SGM)

If you are not registered, you can still vote by way of special vote, using a special voting pack.

Voting must be cast through one of the formal processes noted above. Informal votes by show of hands or other means will not be accepted.

HOW DO I ACCESS OR FILL IN A SPECIAL VOTE?

Voting must be cast through one of the formal processes noted above. Informal votes by show of hands or other means will not be accepted.

You can access a special voting pack either by:
• visiting the MMTB Office (49 Taupiri St, Te Kūiti)
• attending the SGM or
• contacting the Independent Returning Officer (IRO) from Electionz – 0800 666 045

Special votes will have whakapapa verified by the whakapapa validation committee, in consultation with Te Whakaminenga o Rereahu, before being counted.

HOW MANY TIMES CAN I VOTE?

Once. You will be issued with a voter unique identifier number which can only be used once.

WHO CARRIES OUT THE ELECTIONS PROCESS?

The voting process is run by an independent company – Electionz.com. The Independent Returning Officer (IRO) will authenticate all votes received.

WHO DECIDES IF THE MANDATE WILL BE AMENDED?

The Minister for Treaty of Waitangi Negotiations will ultimately make the decision on whether or not the mandate is to be amended, following voting results.

For voting enquiries please contact Electionz at 0800 666 045 or email iro@electionz.com